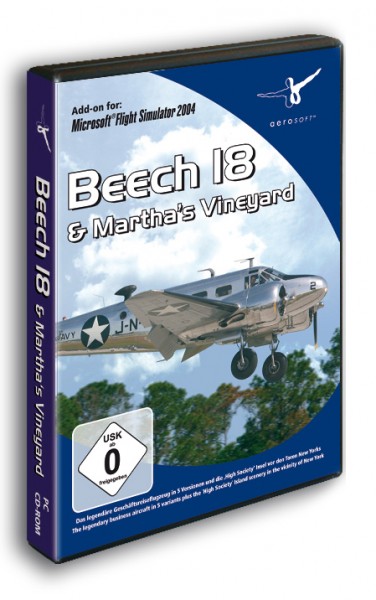 The Beechcraft Model 18 is one of the most famous small twin aircraft. Powered by the superb Wasp Junior engines, it managed to beat time and is still flown all over the world in every possible environment. It is typical Beech aircraft, smooth, fast and efficient, but it is NOT easy to fly and needs a solid hand on the many controls.

The aircraft in FS2004 we can deliver to you comes in many models and liveries. Wheels and floats, civil and military, our Beach covers all of them. The systems installed are typical of the aircraft, a mix of old and modern (but not too modern) that will make sure you can find your way in bad weather and in the most busy airport environment. All the radio and navigation instruments are done to great detail and we even included a 'in flight entertainment' system that will allow you to play all your MP3 files from the cockpit. Of course we'll provide the mind numbing music that is played during boarding in modern aircraft.

Martha's Vineyard is an island of the coast of Cape Cod, Massachusetts. It has a reputation of being a place where the politicians of Washington relax and get into trouble. Senator Edward Kennedy was involved in an accident that killed somebody. In a freak coincidence almost exactly 30 years later another Kennedy (John F.) was involved in an aircraft accident that killed him, his wife and a 3rd person. On a brighter note, Spielberg filmed 'Jaws' (and parts of 'Jaws 2' and 'Jaws The Revenge') on the island.

The scenery we done is based on rather good aerial images, mesh terrain that we worked into scenery that will form a superb base for you flights with the Twin Beech. Special winter and night textures and a slew of special objects make the island come to life. Because it is not possible to do all buildings manually, we spend a long time getting the AutoGen objects correct and you'll find it very dense. Of course there are many small and large ships, cars and other objects. At night you'll be able to find the airport using the lighthouses. Three airports are waiting for you. Our personal favorite is that you can taxi from Katana Airport to the beech and spend the day there in the shade of the wings of your own aircraft. That's cool.