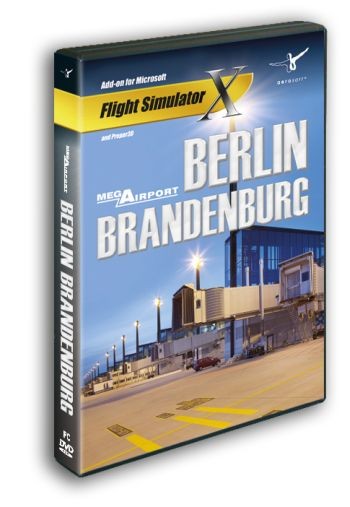 Berlin-Brandenburg Airport is done! You don’t believe us? Well you can - as the add-on "Mega Airport Berlin-Brandenburg" is your opportunity to land at this airport even though it will not open before 2016.

From the very beginning Berlin-Brandenburg Airport was not a very lucky project. Construction work began in September 2006 and inauguration was scheduled for October 2011. By now construction progress is more than three years behind initial schedule and costs have been rocketing. The airport has suffered from continued delays, thus it is far from completion and as of now an opening date is not in sight.

Mega Airport Berlin-Brandenburg covers the existing Airport Berlin Schönefeld as well as the adjacent new international airport. A simple tool makes it easy to switch to the current status or one where the new airport is open. It was designed using the latest technology and has an impressive feature list. See for yourself!

Please be aware of the following limitations concerning Prepar3D v2:

Conclusion by airdailyx.net:
"What was done here is reflective of what can happen when a group of highly talented developers pull their heads and resources together. The results here are amazing. Growing up here in the States, it always been known that German manufacturing is equivalent to and in many ways, superior to that of the US in many ways. [...] Heck many American luxury cars are designed by Germans. A known fact. And as for construction and architecture, some of the best in Europe is found in Germany be it modern or ancient. [...] I do hope the bright minds will quickly get things in order for this airport and as Berlin's new gateway, restore pride to this great city. As for our development team, my final thought? If you ask me, they have already restored some of that confidence and that pride. I highly recommend Aerosoft Berlin Brandenburg and you can purchase and begin your experience now."