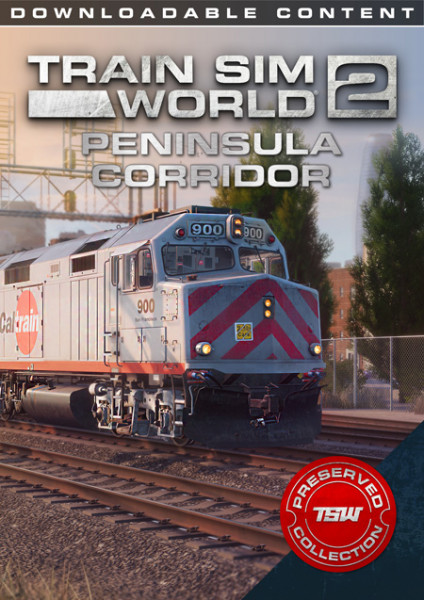 American rail giant Union Pacific operates freight services on the Peninsula and Train Sim World® 2’s Peninsula Corridor will also deliver the challenges of hauling tonnage on the always-busy railroad as you climb aboard Union Pacific’s versatile EMD GP38-2 locomotive. Featuring an authentic Diesel-Electric simulation underpinned with expert technical knowledge and real-world data, the performance, sounds and feel has been accurately reproduced to make the trains feel just like the real thing.

Train Sim World® 2: Peninsula Corridor caters for players of all ability levels with accessible tutorials for beginners and advanced procedures for experts. Whether you're looking to get started operating trains or refreshing your expert knowledge, Train Sim World® 2 has it covered. Feel the detail as you step into the cab, take control then live out your dreams exploring the highly detailed and immersive environment of California’s Peninsula Corridor.

Choose how you want to play in Train Sim World® 2: Peninsula Corridor. Take control and master modern diesel and “push-pull” commuter equipment in a bustling and challenging operating environment or ride along as a passenger and watching the world go by. Why not watch all the action unfold and capture amazing screenshots or go exploring to hunt down all the hidden collectables? Whatever you choose to do, there's lots to see, experience, and enjoy with Train Sim World® 2: Peninsula Corridor.

Fernbus Simulator - MAN Lion's Intercity
€10.03 *
Welcome to aerosoft.com!
We use cookies. Some of them are technically necessary (for example for the shopping cart), others help us improve our website and to offer you a better user experience.