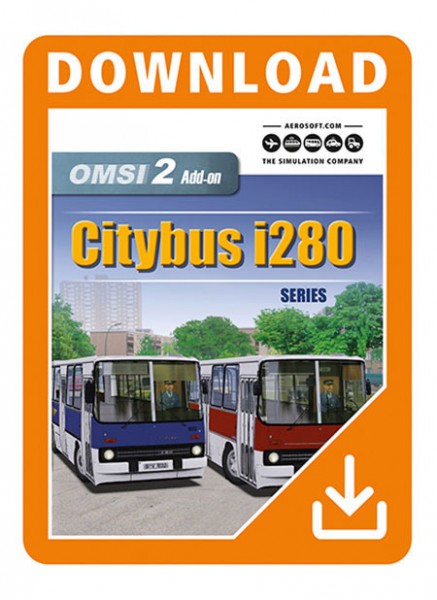 Descripción Requerimientos del sistema
Descripción
Back in the mid-80s! With this add-on, the player can take control of a completely new Hungarian...más
Cerrar menú
Información del producto "OMSI 2 Add-on Citybus i280 Series"

Back in the mid-80s! With this add-on, the player can take control of a completely new Hungarian bus, adapted to work in Germany, allowing him to take a ride through the streets of Berlin and other cities and towns of Eastern Germany. The bus has a length of 16.5 metres, with its engine located under the floor in the truck. A thruster rear axle makes it comfortable to move around the narrow streets of the big cities.

During the 90s many buses were re-exported into many ex-Soviet countries. The add-on includes versions made for many cities of some CIS countries (Russia, Belarus).

The Ikarus 280.02 is presented in versions from 1984 to 1987. They all differ in both appearance and interior. The bus has a 6-speed manual gearbox and a six-cylinder diesel engine D2156HM6U, which allows it to reach a top speed of 60 km/h. It is adapted to work in Germany, so the road train signs and head parking lights are missing. Also, it differs in the almost complete absence of window leafs in the passenger cabin (2 per section).