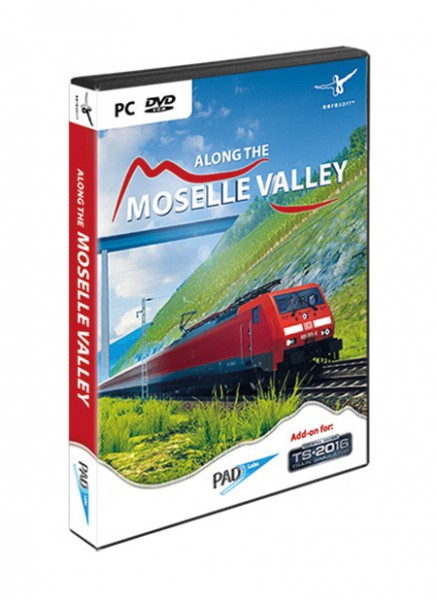 Descripción Requerimientos del sistema
Descripción
The Moselle valley is one of the most beautiful and romantic landscapes in Germany. It is also...más
Cerrar menú
Información del producto "Along the Moselle valley"

The Moselle valley is one of the most beautiful and romantic landscapes in Germany. It is also one of Europe's most charming river valleys, giving the Moselle a river bed that is characterised by its gentle climate and its beautiful vineyards.

Our route departs at Koblenz main station and then leads to Moselweiß in a wide left turn where we can see a huge freight yard with lots of sidings and tracks. After Moselweiß the route crosses the Moselle for the first time at the Gülser Bridge. It will then follow the left bank of the Moselle to Cochem, all the while passing well-known wine villages such as Winningen or Löf. After Cochem we enter the Kaiser Wilhelm Tunnel.

Our package represents the state of the original route from 2012. During this time some construction works were underway to modernize the route and to extend this tunnel. Our state of the route still uses the old double tracked tunnel tube while works are underway on the first of the new single track tubes.

Once we are out of the tunnel, we will head to Bullay through Ediger-Eller and Neef. Leaving Bullay again, we cross the well-known dual deck bridge and then the railway viaduct near Pünderich. It is here were the route branches off towards Traben-Trarbach, while the main route leaves the Moselle valley and proceeds to Trier through to Wittlich.
Near Quint, just shy of Trier, the route meets the Moselle again. From here on we pass Ehrang with its large depot and goods station, cross the Moselle Bridge at Pfalzel to finally reach the main station in Trier. Also included is the industrial area and harbour in Trier-Pfalzel.

The rolling stock on this route consists of an electric locomotive Series 189, mainly used for freight transport on this course, and a diesel railcar Series 628/928. The railcars operate on the branch line between Bullay and Traben-Trarbach.