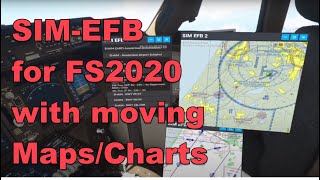 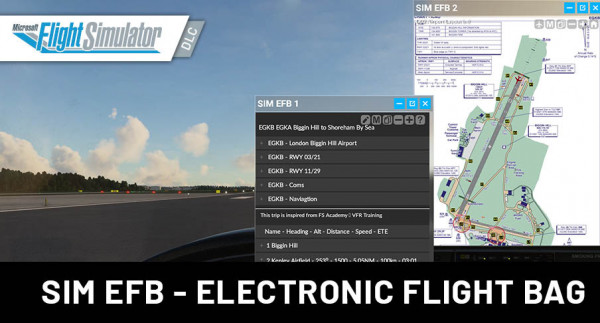 For the world’s best flight simulator, Microsoft Flight Simulator, Sim-EFB provides an easy user interface to create/store flight plans with associated Screen Grabbed Maps/Charts for your next flight or Bush trip. Moving Maps - Your plain position can be animated by simply defining two know points on the Screen Grabbed Map/Chart with a backup World Map with Aeronautical data. Your own NavLog and Notes - You can build your own emulated MSFS Navlog in minutes, displayed outside or within the MSFS simulator.

A “must have” for VR Pilots
In the Virtual Reality flight or multi-screen environments, Sim-EFB comes into its own. Now you can have up to 3 panels arranged in your cockpit to display flight plan notes, maps and charts you have created, in one of the three separate windows. Next time you come into land, in MSFS, you no longer have to break that first-class immersive simulated flight to look at an approach plate.

Sim EFB - Manager
The management software allows you to quickly create a flight plan, from ICOA Code, current MSFS flight Plan or .PLN file. It then looks up the basic airport information, or if Airport information is already in Sim EFB database then it would be used. The search features allow a quick google search for information to add to your flight plan. Notes are then entered, plus any screenshots of any Chart/Map, using the in-built screen grabber, so you have electronic access to these while in flight. Sim EFB also files the flight plans in a structured manner to aid later retrieval, with export to friends with Sim EFB installed.

Database of Airports and Runway Details

Virtually ANY image within the VR immersion

3 Panels In or Out of Game

Create your own Bush Trip

Create your own flight maps