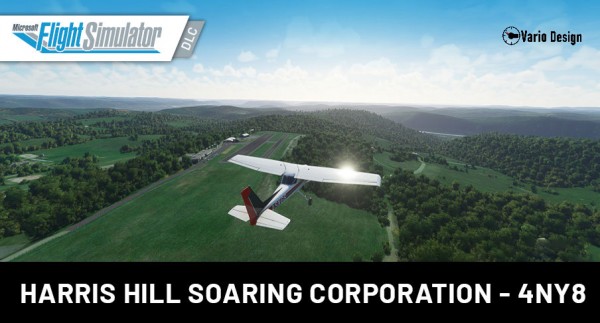 Located on a hill (the "Harris Hill"), the terrain was initially created to facilitate winch launched takeoffs frequently used during the second half of the 20th Century. One historic winch truck is even still preserved in the museum. Now takeoffs are done by towing.

Over the years, the terrain has evolved according to its use, Indeed, the first takeoffs on Harris Hill were organized by the US Navy experimenting the first non-motorized flights during the beginning of the 20th century.

Private pilots have concreted the runway in 1969 and some buildings have been renovated including the famous museum.

Features:
Vario Design goals with the Harris Hill Soaring Corporation project was to create the most reliable representation of the airfield as it looks like today.