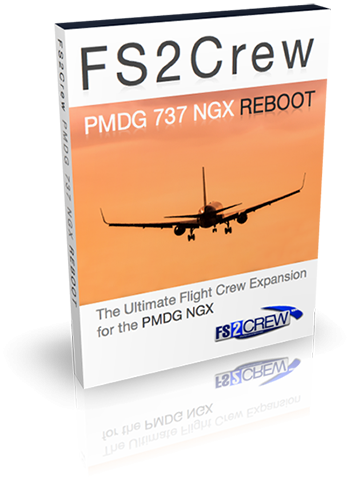 Without a doubt, the PMDG 737 NGX is probably the most popular FS addon aircraft add-on in FS history.

To celebrate this, FS2Crew decided to completely overhaul its old FS2Crew NGX product to bring it up to latest standards.

Please note that the aircraft PMDG 737 NGX isn't included but it is required!

PMDG 737 NGX with Service Pack 1D
Microsoft Flight Simulator X, FSX: Steam Edition or Lockheed Martin Prepar3D V2+/V3+ (not compatible with P3D V4)
Vista/Win 7 users: Voice Control version requires that your Windows Speech Recognizer be set to English - US.
(Note:  If you are not Voice capable, you can still use the included 'Button Control' version or use Windows 10.  Windows 10 allows everyone to install the ENGLISH - US language pack)
Download-Size: 200 MB