The Winter Resort add-on TechnoAlpin Pack - Season 2 offers you a variety of new machines - all realistic replicas of the manufacturer’s machines and equipped with the original licence.

Make snow on your own slope with the current snow cannon T40 or operate it together with your friends in multiplayer mode for the first time. The older model M18 is available in different versions in the add-on as well.

Apart from the snow cannons, the V3 snow lance is also available for some artificial snowmaking. No matter if it’s a mobile version, placed on a tower, a lift or on a swivel arm - the TechnoAlpin Pack offers you various possibilities to individually place your snow cannons and snow lances. In addition, the mobile snow cannon does now also have a water supply hose.

To position a snow cannon, you only have to click on the desired position in the shop. You do not have to drive to the respective location by yourself any longer.

Numerous animated objects make the add-on a detailed and realistic addition to your personal winter resort.

NOTE: Owners of the previous Winter Resort Simulator Add-on TechnoAlpin Pack will reiceie this new version for free in their Steam user account! 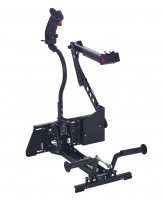