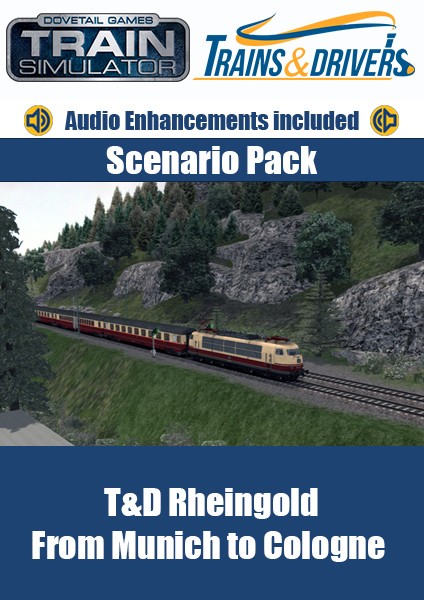 This scenario pack is all about the iconic TEE Rheingold train and the impressive DB BR103. This special heritage railtour lets you experience the DB BR103 with the TEE coaches during your trip through the southern and southwestern parts of Germany.

Mainline runs, combined with some shunting tasks will give you a wonderful and varying amount of scenarios.

The scenarios:
TaD Rheingold 1. Preparations (BR294, Munich - Augsburg):
Your shift begins in Munich, where you will start the day by pickung up the train at Laim  and bringing the TEE Rheingold from Laim Yard to Munich main station.

TaD Rheingold 2. Departing Munich (BR103 TEE, Munich - Augsburg):
The railtour starts and you will take the TEE Rheingold to its first stop at Augsburg.

TaD Rheingold 3. Via Karlsruhe to Mannheim (BR103 TEE, Karlsruhe - Mannheim):
This part starts some kilometres before Karlsruhe, where you will change your direction of travel. After shunting your loco to the other end of the train, the trip continues northwards. You may take it easy on the way up north, there is no need to travel faster than 160km/h. You may speed up to 200 km/h, but expect a long wait shortly before Mannheim then.

TaD Rheingold 4. Arriving at Cologne (BR103, Cologne - Koblenz):
In this final leg of the railtour, you are driving the train through the beautiful valley of the Rhine until you reach your final destination: Cologne.