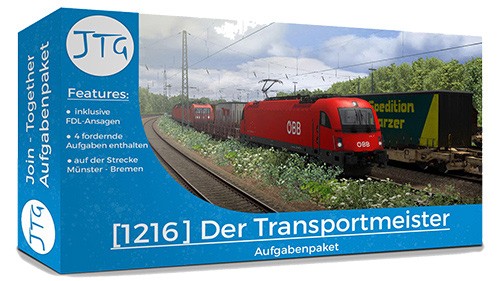 Do my drivers in service today have the necessary series certification? This is a question a dispatcher often asks himself. Especially this week, when the class 1216 (better known as the Taurus III) of the ÖBB (Austrian Federal Railways) is in active test operation on Münster - Bremen. Step into the role of one of the locomotive drivers who are authorized for the 1216. Run freight trains between Münster and Bremen in regular service, bring a heavy boiler train to its destination and transfer some BR145s to the provision. Actually, you wanted to take it a bit easier over the weekend, but then a regional train breaks down due to damage to the brakes and you are called for towing.

Experience the ÖBB class 1216 on the route Münster - Bremen in 4 exciting and challenging scenarios.

Attention: As these tasks are related to heavy goods traffic, it is mandatory to use the PZB mode U (except for the task "The Towing Loco"). You can change the PZB mode on the Taurus with the key combination SHIFT and 7.