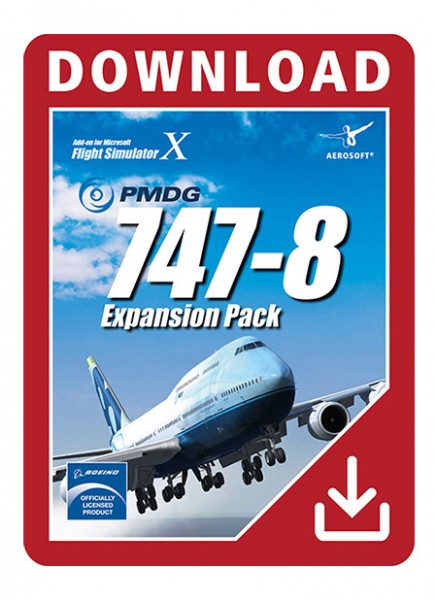 Descrizione Requisiti di sistema
Descrizione
PMDG is proud to present the latest and upgraded model of the 747 family - the 747-8. This... altro
Chiudi menu
Informazione prodotto "PMDG 747-8 Queen of the Skies II Expansion Pack for FSX"

We have included both the -8 passenger and -8F Freighter variant in this single package. No less than 35 pages of detailed options from the world's 747-8 fleets are modelled. From the highly visible ones like antenna types and position all the way to obscure cockpit display and FMC options that real-world crews will recognize, it is the most complete set of options ever placed into an FSX addon aircraft.

Minimum:
Microsoft Flight Simulator X (SP2) or FSX: Steam Edition + PMDG 747-400 Queen of The Skies II (FSX)
Windows 7 64-bit (older OSes such as Windows XP may work, but we cannot guarantee compatibility or support)
Dual Core, 2.5 GHz or faster
4 GB of RAM
Video card with at least 1 GB of VRAM, DirectX 9 compatible Nvidia or ATI card (Onboard motherboard or CPU video is not supported, some of the newer Intel designs may work but we cannot guarantee compatibility)