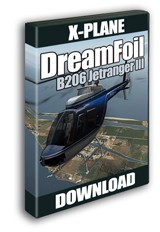 Descrizione Requisiti di sistema
Descrizione
The Bell 206 JetRanger is without a doubt one of the best known helicopters. It's flown in... altro
Chiudi menu
Informazione prodotto "DreamFoil Bell 206 Jetranger III"

The Bell 206 JetRanger is without a doubt one of the best known helicopters. It's flown in countries all over the world is just about any role a helicopter can perform. Though it dates back to the 1960's it is still in development and production making it the most successful commercial helicopter. Even though it is a real workhorse it holds more industry records than any other helicopter.

So it seems logical that the simulator fans of X-Plane should get a high end simulation of this great helicopter. DreamFoil delivered us a model and we are happy to sell it to you. It is not only a great X-Plane model but it uses additional plug-ins to increase the realism of the systems and the sounds. It makes the DreamFoil one of the finest aircraft for X-plane with an immersion factor that has not been surpassed Strongly recommended by Aerosoft!