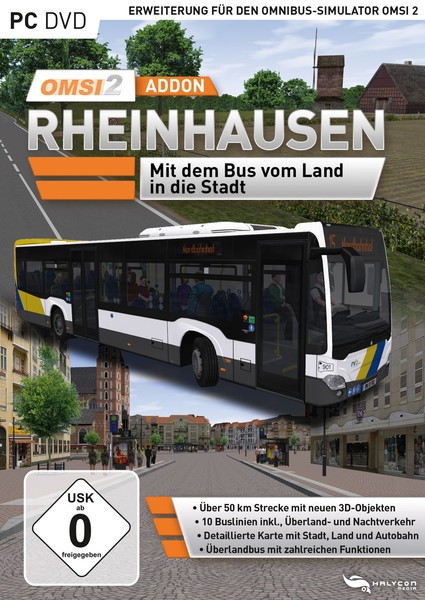 Variety is the spice of life! And the OMSI 2 Add-On- Rheinhausen is certainly jam-packed with variety. As well as the challenges of driving a bus in urban traffic, virtual bus drivers also have tempting opportunities to manoeuvre a large vehicle safely through traffic on interurban routes.

Rheinhausen captivates visitors with its densely built-up urban area with fascinating architecture and with the rural charm of its surroundings. Beyond the city limits, more passengers are waiting to be chauffeured to their destinations safely and on time. It is not modelled on any real city, but it reflects a pattern of urban development with links to a rural hinterland which is common in Germany.

The OMSI 2 Add-On- Rheinhausen offers 10 completely driveable bus lines serving the city and the surrounding countryside. Two regional lines carry additional passengers into the inner city and back out to the edge of town. Driving routes, junctions and stops are sometimes shared with the town’s light rail service; drivers must be especially careful here.

Over 500 new 3D objects have been created for Rheinhausen. They include new residential dwelling houses, a theatre, the town’s train station, supermarkets, and commercial premises as well as new bus stop shelters, signs, rubbish bins, post boxes, parking machines and more. New, high-resolution textures have been used for streets and pavements. Rural areas are also shown in rich detail!

Numerous 3D objects such as a football pitch, a playground and a footbridge for hikers inject even more lifelike realism into this little world.
More than 110 bus stops and 200 new junctions are located along approximately 50 kilometres of driving routes. The AI vehicles travel on realistic city streets, country roads, dual carriageways and motorways.

The buses for both urban and interurban routes are supplied by a bus transport operator with a large and fully driveable central depot. The game includes a suitable interurban bus which was created in rich detail specifically for this add-on and given its own special livery.
Time-controlled events such as bins that are put out for collection in the streets on certain days and roadworks that necessitate diversions at times ensure the traffic flow is realistic. But random events such as illegal parking and weather (with dynamic snow) also crop up and make the lives of bus drivers harder.

As you drive from town out into the countryside with the OMSI 2 Add-On- Rheinhausen, you will enjoy varied driving experiences in an environment created with meticulous care and shown in fine detail.