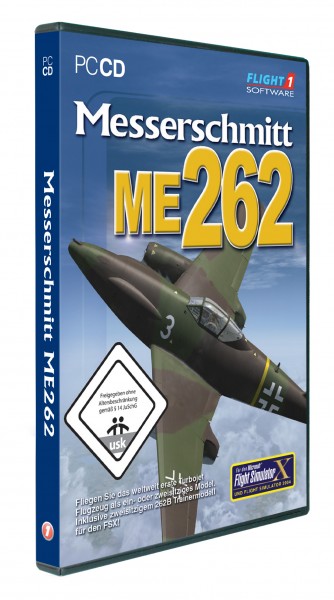 The Messerschmitt Me262 Schwalbe (German for "Swallow") was the world's first operational turbojet fighter aircraft. It saw action from late summer of 1944 until the end of World War II as a multi-role fighter/bomber/interceptor warplane for the Luftwaffe.

Take your seat in the legendary 'Stormbird'
German pilots nicknamed this incredible aircraft as the Sturmvogel (Germanfor "Stormbird"). Ultimately though the Me262 had little impact on the course of the war, with 500 odd kills claimed against a loss of 100 aircraft and many more grounded due to lack of fuel.

However, its spectacular and revolutionary design has left it as one of the legendary and most recognisable combat aircraft of the era.

Of the 1,430 total aircraft were built, though only about 300 ever saw combat. Some 120 two-seat trainers were built, made by modifying the single seat airframe. The Me262, although a spectacular aircraft for its time, had a negligible impact on the course of the war, shooting down an estimated 150 Allied aircraft for the loss of 100 Me 262s, the majority of aircraft being grounded too often for lack of fuel.

Built specifically for FSX (SP2/Acceleration) from the critically acclaimed developers of the Bf109, this all-new extremely detailed and functional Gmax version of the famed Messerschmitt Me262 features not only the single seat fighters, but the two-seat trainer with fully operational dual cockpits, the dual seat Nightfighter as well with a total of ten different aircraft variants. (Dual seat variants are for FSX only.)

In addition the package includes the Me262A single seat -1A and 2A models in seven variants.

Several of the single seat models have also been included for FS2004.

The boxed edition includes both the Flight Simulator 2004 and Flight Simulator X versions of the software (model variations based on simulator version) with printed manual detailing the cockpits and operational procedures for this remarkable aircraft.