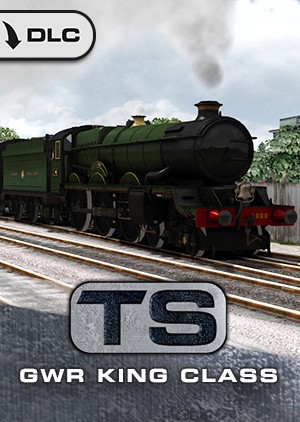 The GWR 6000 Class was the largest production locomotive used by the Great Western Railway, and was referred to as the King Class following the naming of the first example after the then-monarch, King George V, in 1927.

King George V went on to gain further fame when it visited the Baltimore and Ohio Railroad in the United States in 1927 to participate in the railroad’s centenary celebrations, and was presented with a commemorative silver bell. Designed to be the most powerful British passenger locomotives of their day, the Kings could produce superb performances when driven by an experienced crew, and it was not unknown for a King to haul an 800-ton train at over 70mph.

The Kings hauled express passenger services (including the Cornish Riviera Limited) and continued in service under nationalisation until 1962, when they were replaced by diesel traction. Three GWR Kings currently survive in preservation, including the illustrious King George V.
For Train Simulator, this impressive powerhouse has real presence on the rails and is highly detailed, even including a realistic glow from the firebox inside the cab and GWR chocolate & cream livery Centenary coaches.