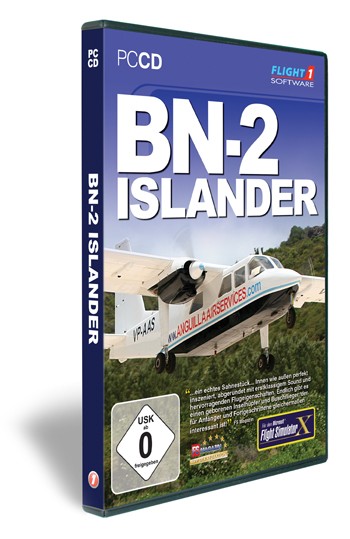 The BN-2 Islander is a British light utility aircraft, mainline airliner and cargo aircraft designed and originally manufactured by Britten-Norman of the United Kingdom. The Islander is one of the best-selling commercial aircraft types produced in Europe and although designed in the 1960s, over 750 are still in service with some 50 commercial operators around the world. The aircraft is also used by the Army and Police forces in the United Kingdom and is a popular light transport with over 30 military aviation operators.

The Islander’s simple and rugged manufacture makes for daily operation in and out of rough grass and unprepared strips - as short as 300m - in all-weathers. Indeed, its twin-engined reliability, 30kts cross-wind limit and IFR cockpit fitment has seen the Islander operate the only regular daily transport in the Scottish Western Isles in weather that even has the local sheep running for cover.

Developed over two years with the help of real-world Islander pilots and operators, this exciting simulated version is a full-featured FSX release, including technologies such as cockpit self-shadowing, HDR bloom effects, and bump mapping and DX10 compatible external and internal visuals.

Whether you want to operate simulated inter-island transport, feeder airliner flights or just simply have fun in this all-purpose aircraft, the Islander is certain to put a smile on your face.

Over the years, the BN-2 has spawned many variants with an almost endless combination of engine and cockpit fitments.

We’ve included two exterior model variants for both early and late nose profile (BN-2A and BN-2B) Islanders, with related lighting accessories - all beautifully represented with a total of 13 paint-schemes:

Each is rendered in stunning detail and a Paint Kit makes it easy for you to create your own extras.

PLUS the avionics fitment includes: Conclusion by Avsim.com:
"If you like flying around the islands, pretty much anywhere in the world, this airplane is a great way to move half a dozen passengers with cargo.  With its great flying characteristics it will get you in and out of small airstrips and once you master the KLN GPS, you will have no trouble finding your way around.  It captures the feeling of a no-nonsense workhorse aircraft very well and really grows on you as you fly it more and more."

Conclusion by FlightSim.com:
"I am a high, heavy, and fast kind of guy. I prefer the smell of Jet A to Avgas...however the BN-2 has brought me back into the world of small light aircraft. She was a dream to fly, and I had a blast loading her up with pax/mail/cargo in FS Passengers, had a blast only having access to what a real BN-2 pilot has access to. It's sometimes hard to give a real extensive review on something so simple but regardless the BN-2 while not my favorite plane sits in a special place being the only true STOL plane I've got. Flight One and Virtavia have gone the extra mile to make you FEEL like you're actually in the plane. I certainly recommend this to the diehard GA/light twin fan. You will have a blast! There were some discrepancies but hey every add-on has them. I do think that she's a bit overpriced but then when you go back and look as to just how hard they worked and the research to make you feel like you are in the plane perhaps she's not that overpriced."