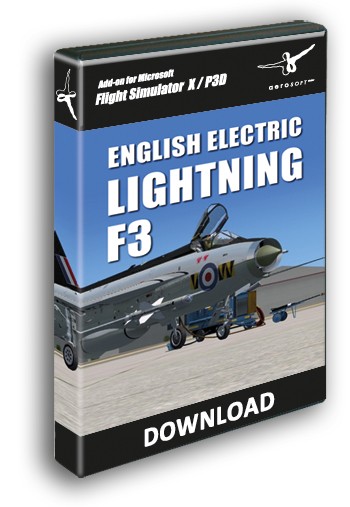 The English Electric Lightning was designed in the late 1950's as an interceptor. This class of aircraft had to have great speed and even better climb speed to intercept the Russian bombers before they could reach their targets. The Lightning most certainly is fast and was in fact the first aircraft that could do supercruise, meaning it could fly supersonic without the use of afterburner.

The F3 version in this product is not an easy aircraft to fly. It’s complex and full of systems you have to manage without the aid of modern electronics. Landing especially is hard as the landing speed is awfully high and there are many things you have to check.

Aircraft of this type are rare for Flight Simulator and we feel the Lightning fills a niche that needed filling.

*TacPack is not part of this add-on and has to be bought separately.

The Aerosoft English Electric 'Lightning' F.3 is awarded an overall Mutley’s Hangar score of 9.7/10, with an "Outstanding" and a Mutley's Hangar Gold Award.

Conclusion by MutleysHangar.com:
"In the last year or so, there have been some very impressive additions to the military side of FSX and P3D. The Aerosoft English Electric 'Lightning' F.3 is right up there with the best. It is a truly magnificent beast and captures the real world aircraft brilliantly. Yes, there are a few little niggles mentioned in this review, but these are mostly where the developer has perhaps tried to put in a little bit more for their customers and not added the depth to those extras in line with the main product. I guess some will like that side, personally I would like to have seen the product stay strictly on the F.3 topic and concentrate on the one version, or to provide more robust F.1A and F.2 variants in the package. If the latter was produced, then I would have been happy with a bigger price tag. Like the real world 'Lightning', this add-on is not for the faint hearted. It wouldn’t be very good if it was. If you are new to flight simulators, then make this product a goal. Fly something more forgiving first and work your way up to the 'Lightning' F.3, and when you are ready, then go and buy it. If you are an experienced virtual pilot, then lucky you, you are in for a treat!"

*there are a few limitations with lights in Prepar3D, we are waiting for the planned update from Lockheed to solve those.

Vol.2 and Vol.3 will be delivered with the purchase of this product.