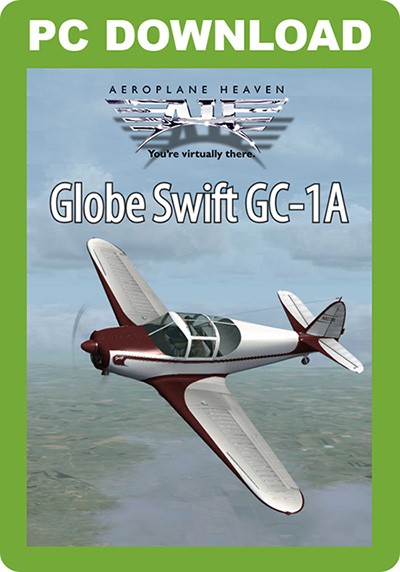 Designed by R.S. Johnson in 1940, the Swift's birth was not without its complications. The intervention of WWII meant that the design did not actually reach certification until May, 1946 when it had been the subject of several design modifications carried out by K.H. 'Bud' Knox. In the late 1940s Globe was to become insolvent and Temco acquired the type certificate and went on to build further aircraft. Temco modified the Swift to become the first post-war military trainer but it lost the race to the Beechcraft Mentor. Full production ceased in 1951 but spare parts and service items continued to be produced by Universal Aircraft Industries until 1979.

Aeroplane Heaven bring you the Globe Swift that is based on the original 'A' version, in 12 liveries and with a Paint Kit.

An in-game tutorial and tips system is included, and in-game options allow you to choose from four different pilots and copilots, remove VC glass and gauge glass and interact with simulator-specific functions - all from the comfort of the pilot's seat.

Custom sounds and 3D modelled needles ensure accuracy and smoothness. With lovely flight characteristics, the Globe Swift will ensure that even the most novice flight simulator user will have a smile on his or her face.