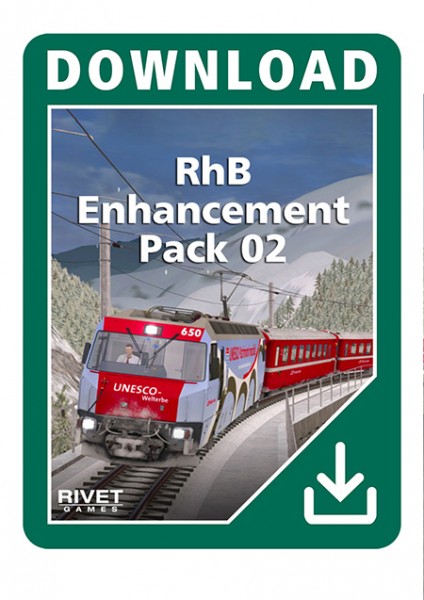 Get ready for another helping of classic Arosa Line traction with the authentic RhB Enhancement Pack 02 for Train Simulator! A new range of Alpine challenges await you inside…

First built in 1973, the Ge 4/4 II was designed as a capable replacement to the older and unreliable Ge 6/6 I. More would be introduced in 1984, making a total of 23 locomotives to serve the Rhaetian Railway’s core network. They share resemblance to locomotives of the Swiss Federal Railways, but are broadly different under the hood, well-suited for the challenging Alpine landscape which awaited them in their mixed-traffic service.

The classification of the Ge 4/4 II indicates that it is the RhB’s second example of a locomotive which has 4 axles, all of which are powered. The 23 locomotives are numbered from 611 to 633; all of them are named after towns served by the RhB network, and brandish the relevant coat of arms next to the locomotive name. While the standard RhB red livery is applied across the fleet, multiple locomotives actually feature promotional designs depicting various events and advertisements.

In 1997, the Ge 4/4 II fleet was permitted to work along the famed Arosa Line as freight and passenger locomotives, as the 25 km mountain railway was converted to the same overhead system as the rest of the RhB network; 2400 V DC to 11 kV 16.7 Hz AC. The Ge 4/4 II’s power output was ideal for the sharp grades and ever-growing traffic, and they would easily work passengers and freight in tandem, making for most unique consists throughout the valley.

Age is always a concern with classic traction, however the entire Ge 4/4 II fleet was modernised to keep up with ever-advancing technologies. New headlight clusters were fitted on several locomotives from 1999, and from 2004 until 2008, analogue components were taken out with digitised equivalents installed.

Expand your collection with the RhB Enhancement Pack 02 and try out a classic loco, 3 brand new scenarios and a range of rolling stock now!

Please note that the Arosa Line Route Add-On is available separately and required in order to play the included scenarios!

Romantic Railroads - BR03
€24.95 *
Welcome to aerosoft.com!
We use cookies. Some of them are technically necessary (for example for the shopping cart), others help us improve our website and to offer you a better user experience.