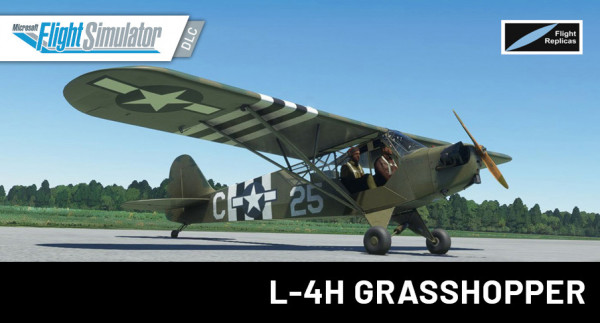 Thanks to MSFS's more advanced handling of aerodynamics, and the L-4's simple but effective instrumentation,  you'll have to keep a sharp eye on airspeed and develop a feel for what the aircraft is doing by also keeping your eyes outside the cockpit. This is what was called "flying by the seat of your pants", and is a true component of good piloting skills. You'll also need to 'hand prop' the L-4 to start the engine.

With great visibility and fully opening doors, you'll be able to enjoy the amazing MSFS world scenery in a way only the L-4 can provide, and understand why historically this aircraft was so prized in WWII. Not to mention the challenge of being able to land almost anywhere, once you know the aircraft well.

History:
The history of the L-4 is best summed up by Ken Wakefield, author of "The Fighting Grasshoppers" and "Lightplanes at War", who graciously contributed the following overview of this aircraft:

"The Piper L-4 Grasshopper of WW2 was the military version of the highly popular pre-war J3 Cub, by which name it was more widely known to service personnel. Of the 5,500 L-4 variants produced between 1942 and 1945, some went to liaison squadrons and of the USAAF, but the vast majority went to US Army Ground Forces, for use as Air Observation Posts (Air OPs) with the Field Artillery. In both air and ground forces, the L-4 was also used as a flying Jeep, among other things carrying priority mail and personnel between HQs and command posts. Its Continental engine produced only 65hp, yet the L-4's excellent short field performance enabled it to operate from the smallest of improvised airstrips, including roads, adjacent to command posts.

Unlike most other combat aircraft, the L-4 was un-armed and un-armoured. It was one of the smallest aircraft of WW2 and, with a cruising speed of only 75 mph, it was the slowest. Nevertheless, it has been claimed that a single L-4, directing the firepower of an entire Division, could bring a greater weight of explosives to bear on a target then any other aircraft of that period. With the exception of the atomic bomb carrying B-29 Superfortress, no other single aircraft had the destructive capability of the diminutive L-4. It was most widely used in Europe, where more than 2,700 served with the Field Artillery, and of these nearly 900 were lost through enemy action or in accidents. Of those that survived the war, about 150 were shipped back to the US, most of the remainder eventually being sold to civilian purchasers in Britain, France, Switzerland, Denmark and elsewhere in Europe. More than 60 years on many of these are still flying with, in recent years, an increasing number being restored to their original military configuration and markings. A truly remarkable 'warbird', long to be remembered."

So successful was the L-4 that it's military use continued on through to the Korean War, and as recently as Vietnam. Today, hundreds still fly on as civilian light aircraft, some as meticulously restored military aircraft and others in colourful civilian schemes.