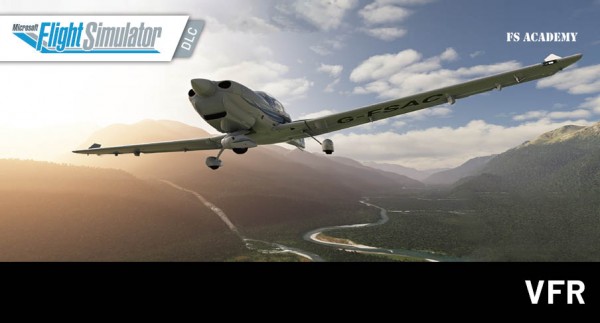 Flight training missions return, all new and better than ever, with FS Academy - VFR for Microsoft Flight Simulator.

VFR is an all-new, study-level package to coach you step-by-step into the varied and rewarding world of flying visually under Visual Flight Rules.

Brought to you by a real airline captain, VFR gives you the authentic knowledge and teaches you how to fly like the professionals to get maximum realism and authenticity from your flight simulation, covering ATC, airspace, circuits, mountain flying, cross-country navigation and more.

Use VFR Maps and  Jeppesen charts to find your way as you travel cross-country with your instructor guiding you every step of the way through a series of 12 authentic missions. Start with the basics before being let loose on a series of short solo Bush-Trips and sitting your virtual Skills Test with an examiner.

The skills you will learn are transferable to practically any light aircraft and environment, as we will conduct our lessons in varied locations across the globe, using the local flying rules and procedures to give you the broadest international skillset possible.

Each mission has accompanying theory, found in the comprehensive ground school manual. Learn the theory before you take to the skies and practice it for yourself with the help of your instructor.

FS Academy - VFR is accompanied by a comprehensive 70+ page ground school manual, covering a host of topics to boost your background knowledge before you take to the skies, including:

A crucial skill for any pilot, it's time to up your game with FS Academy - VFR.