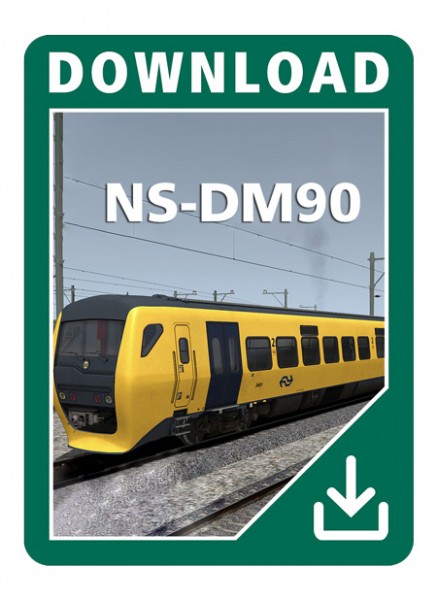 A reproduction of the DM90 'Buffel' diesel passenger train that operates/operated on the non-electrified lines of the Nederlandse Spoorwegen (Dutch national railways) network.

The diesel train '90 (DM '90), officially also known as the Buffel, is a series of Dutch railways diesel multiple units, composed of 53 pairs of wagons. The Buffel was derived from the "Stoptreinmaterieel '90", also known as the Railhopper. The Buffels were put into service by Nederlandse Spoorwegen from 1996, and also by Syntus from 1999.

The NS ordered 53 units in 1993 from Talbot, now Bombardier, in Aken. The complete electrical furnishing, train operation and diagnosis functions were delivered by Holec Ridderkerk (now Alstom). Duewag (in Krefeld) built the interiors and from there the trains were delivered to the Netherlands. Train 3401 rolled out of the factory on March 12th 1996. In 1998, NS put the last unit into service, number 3453.

The trains were introduced to many of the non-electrified routes towards the end of the 90's. Following this, a large amount of these networks were opened to public bidding, at which point the operation of the trains fell to other companies. Syntus took over a number of the DM'90 trains, as did other operators. Part of the rest of the DM'90 fleet was temporarily moved into stopping passenger train services in other electrified areas of the network.

The first fifteen units were officially retired from service on December 13th 2009. In the days and weeks following this, many of them were actually re-introduced into service to deal with a shortage of rolling stock during a particularly rough winter.

Scenarios will become available on the official ChrisTrains website  as soon as they are completed.