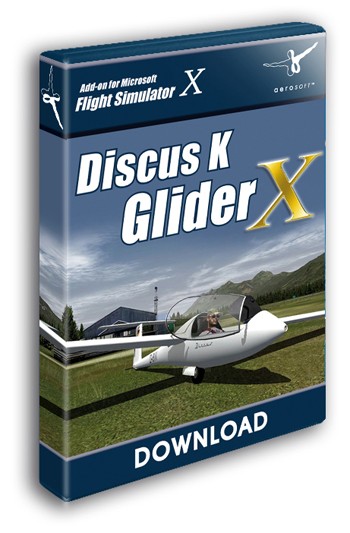 Aerobatic gliding is perhaps the most complex and demanding of aviation sports. It's hard enough with an engine but doing it all on kinetic energy demands a very high degree of skill. And a suitable aircraft and finally there is one for FS!

The Discus is a Standard Class glider created by Schempp-Hirth. It was produced in Germany between 1984 and 1995 and around 850 aircraft are still flying. It is still produced in the Czech Republic in low numbers. With its distinctive swept back leading edge it was rather revolutionary when it was produced and it totally dominated the standard class sailplane racing throughout the 1980s and won the 1985, 1987 and 1989 World Gliding Championships.

Though it is no longer a top contender for the prices (the progress in gliders in the last 10 years is nothing short of amazing), it is still a high performance glider with a 42 to 1 glide ratio. The good natured flight characteristics made it a perfect club glider for the experienced gliders. The later models (though many are retrofitted) had winglets that made the performance and handling better. In Europe it is one of the most prolific gliders and it is very typical of gliders that the thousands of enthusiasts fly every weekend.

The K model was one of the last versions of the Discus and an attempt to create a capable aerobatic contest version. They used one of the prototypes and the Discus K flew for the first time in 1988. It was moderately successful, but for most FSX pilots it will be more than a handful!

The Aerosoft Discus has been create with help from Schempp-Hirth and without a doubt it is the first true high end glider add-on for FS. From the flight model that is near perfect (do note we never used these words for any product before) to the high detail modeling, it’s a product without rivals and without precedent. Conlusion by Avsim.com:
"What can I say, gorgeous! That was and still is, more or less, the same conclusion from the previous Aerosoft’s Discus Glider X review. It was and still is, the only commercial FSX add-on glider that offers high flight performances, an as real as possible external model with, although simple, a nice looking Virtual Cockpit. There’s no need for a 2D cockpit since the Virtual Cockpit FPS are high. And because of this, Aerosoft didn’t add a 2D cockpit. High frame rates mean somewhere, based on my PC specifications with all sliders maximum, between 30 – 40 FPS. When I place my sliders back to a more normal position, the frame rates move up even past 50 FPS. Complaints? Not by me!

What was the price of this individual Discus K? Only available as a download, this Discus K costs  €13.95 or approximately US$20.00. Suppose you own already the Discus Glider X package, you get a 30% discount on the Discus K. Expensive? Not at all, knowing what this model offers you. Ok, the Discus K comes only in one livery, but as said before; only one Discus K was build.

I would say go for it and try to master Aerosoft’s Discus K. See it as your next challenge!"

Owners of the previous version "Discus Glider X" have the possibility to use our cost saving upgrade service: