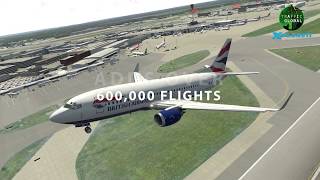 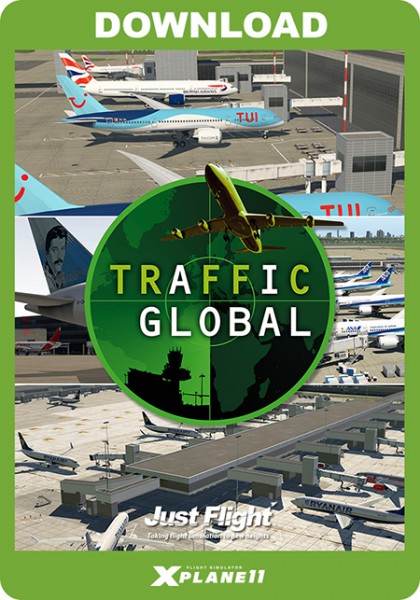 Traffic Global for X-Plane 11/12 (Windows) provides high quality animated AI aircraft models in authentic airline liveries and with full 3D sound and lighting and effects. Installation is simple and the software is ready to run 'out the box'.

Traffic Global comes with 65 aircraft types and over 860 liveries covering most of the world’s airlines. Over 600,000 flights are included by default and these cover more than 3,000 global airports with complex, multi-point, multi-day flight schedules. New or altered aircraft liveries can be easily added and do not require any additional configuration.

Traffic Global loads everything in the background and is usually ready to go as soon as your flight starts. Even with hundreds of AI aircraft on screen and more being simulated nearby, simulator performance is barely affected.

The AI aircraft respond to the movements of your aircraft as you move around an airport and the software is compatible with all third-party airports. Seven new controllable external views allow you to follow individual AI aircraft and three new control windows are also included: a radar display centred on your aircraft, a flight board which is switchable between all nearby airports and a flight plan display showing nearby airports, taxiways and flying aircraft.

For more details and some FAQs you can check out the manual here!

Features:
Hundreds of combinations of airlines and aircraft provided - Traffic Global comes with 65 aircraft types over 860 liveries covering most of the world’s airlines.

High performance – even with hundreds of AI aircraft on screen and more being simulated nearby, simulator performance is barely affected. Traffic Global is highly multi-threaded.

AI respond to the sim pilot – as you move around the airport, other traffic will do its best to stop and allow you to pass. Collision with AI is possible but can be disabled.

Seamless start-up – there is no need to manually configure a flight plan or wait when you start a new flight or move to a new airport; Traffic Global loads everything in the background and is usually ready to go as soon as your flight starts.

Full 3D sound for all aircraft – each AI aircraft has engine and equipment sounds modelled in 3D using the widely supported OpenAL. Volume is controllable independently of X-Plane’s own.

Simple installation – no messing around setting up subscriptions, additional files or per-airport custom setups. Traffic Global is ready to run 'out the box'.

Many new camera types – seven new controllable external views allow you to follow individual AI aircraft, either independently or in association with your own.

Three new control windows – a radar display centred on your aircraft, a flight board switchable between all nearby airports, and a flight plan display showing nearby airports, taxiways and flying aircraft are provided. Each has hotkeys and can be detached from the main X-Plane window.

Networking support included as standard – serious cockpit builders using more than one PC to control their displays get the same traffic across their entire setup.

Extendable – new or altered aircraft liveries can easily be added and will be used with no additional configuration. New traffic can be added using freely-available tools; Traffic Global uses the same traffic database format as Prepar3D and Flight Simulator X.

Potential for third-party plugin integration – Traffic Global publishes 'datarefs' exposing the locations of all nearby traffic and includes example code for using them.

Conclusion by X-Plained.com:
"My interest in Traffic Global was to see it do what it said it does: “The purpose is to make the airport environments feel much busier in a believable way – not recreating the exact location of real-world aircraft in real time but making airport activity feel both appropriate and engaging.” I am not an online flyer and the empty airports and skies have long been one of my major annoyances in my simming universe.

Traffic Global has lived up to its promise and does, in a very satisfying way, solve that problem. My world is now full of active and inactive aircraft that behave in a mostly very realistic manner and add the sights and sounds of a busy airport to my flight experience. I especially appreciate its attention to general aviation activities since that is where I spend the predominant number of my flight hours.

[..] I highly recommend it to anyone who would like to add life to their off-line flying experience."

Obstacles & VFR Landmarks - FRANCE XP11
€34.90 *
Welcome to aerosoft.com!
We use cookies. Some of them are technically necessary (for example for the shopping cart), others help us improve our website and to offer you a better user experience.