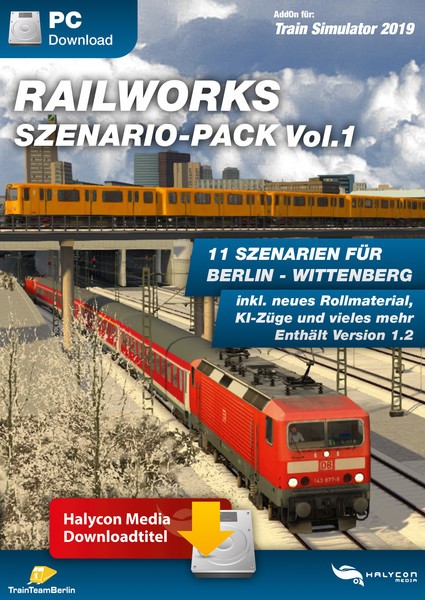 After releasing the four PlusPacks we built our first scenario package: It's peppered with dozens of new vehicles and allows a realistic traffic scheme on the Berlin to Wittenberg route for the first time. Besides realistic trainsets we set a great value on the train operating processes - special situations in service and assignments by the dispatcher will make the scenarios a challenge.

Nevertheless, there we kept realism - you will find original timetables and rakes from the year 2009 as far as it was possible to implement them. The scenarios will play in the timetable year 2009 predominantly. Furthermore we added the famous train stuff announcements. On top, we inscribed the train destination displays on the platforms depending on the scenario with real data for the first time. Using scenario scripts we were able to implement several operational specialties for the first time on a German route in Train Simulator 2014. So there is a lot material to discover and to do handicrafts with.

Counting all the delivered vehicles of this addon (with its loading and painting versions), there are about 300 vehicles. This is an extent that gives our addon the potential to become a standard work of scenario creators. All trainsets - AI-trains (artificial intelligence, usage only for dispatcher controlled traffic) as well as player trains - make use of real sounds and have special functions for increasing the realism.

There are eleven scenarios at all that offer hours of driving pleasure. Two versions of each scenario were created - one especially for users of the Railworks Pluspacks.